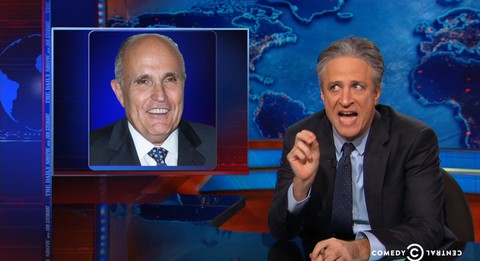 Jon Stewart ripped into former NYC Mayor Rudy Giuliani and comments he recently made questioning President Obama's patriotism. Giuliani, speaking at a Republican dinner featuring Wisconsin Governor Scott Walker at Manhattan's 21 Club said, "I do not believe, and I know this is a horrible things to say, but I do not believe that the President loves America." The true measure of how bad Giuliani's comments are, as Stewart points out, is that Giuliani had to preface that he was about to say something horrible about President Obama to a rabid Republican audience that "came to hear" Giuliani spew "horrible Obama stuff."

Attempting to back-track, Giuliani did the rounds on a number of news programs, saying at one point that he was not questioning the President's patriotism. Cue Stewart: "Actually that is literally what you did."

But maybe what Giuliani is trying to tell us is that Obama is not capable of love of country because he is a robot sent from the future sent to destroy America by giving us healthcare. Or maybe Giuliani thinks that he is the only one who truly loves America because of what he went though on 9/11. Oh wait, we can debunk that too: "You know, you're not the mayor of 9/11, right?" Stewart asks. "You don't own 9/11. You don't own anything but the unique willingness to crassly exploit it."