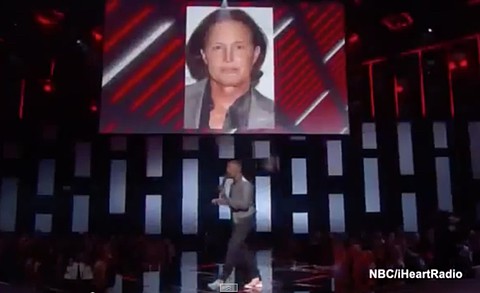 Host Jamie Foxx made a big joke out of Bruce Jenner's reported transition at the 'IHeartRadio' Music Awards last night.

“He’s doing a his and her duet all by himself," said Foxx, before adding, "I'm just busting your balls — while I still can."

Foxx was called out immediately on social media:

Boo! Shame on you #iHeartAwards for allowing @iamjamiefoxx to be transphobic on national television! Those #BruceJenner jokes were wrong!!!

Jamie Foxx making jokes about Bruce Jenner being transgendered was absolutely rude. NOT. FUNNY. AT. ALL.

That Bruce Jenner joke was f–king disgusting, bullying and not funny. Jamie Foxx is a hack piece of shit.

Totally unacceptable for the @iHeartRadio awards and Jamie Foxx to poke fun of Bruce Jenner for his gender change. SICKENING!