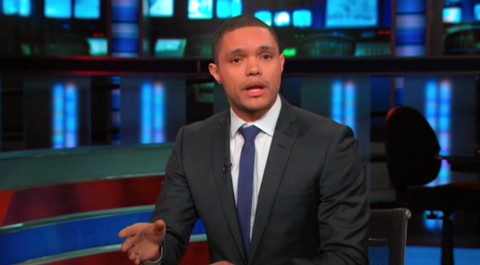 Trevor Noah, a South African comic who made his debut as a contributor in December, will succeed Jon Stewart as host of The Daily Show, the NYT reports:

The network’s selection of Mr. Noah comes less than two months after Mr. Stewart, 52, revealed on Feb. 10 that he was leaving “The Daily Show” after a highly successful 16-year run that transformed the show into authoritative, satirical comedy on current events. (An exact timetable for Mr. Stewart’s departure has not been decided, Comedy Central said.)

…The appointment of Mr. Noah, a newcomer to American television, promises to add youthful vitality and international perspective to “The Daily Show.” It puts a nonwhite performer at the head of this flagship Comedy Central franchise, and one who comes with Mr. Stewart’s endorsement.

“I’m thrilled for the show and for Trevor,” Mr. Stewart said in a statement. “He’s a tremendous comic and talent that we’ve loved working with.” Mr. Stewart added that he “may rejoin as a correspondent just to be a part of it!!!”

Watch a short reel of Noah's work, AFTER THE JUMP…

Tweeted Noah after the announcement: "No-one can replace Jon Stewart. But together with the amazing team at The Daily Show, we will continue to make this the best damn news show!"

No-one can replace Jon Stewart. But together with the amazing team at The Daily Show, we will continue to make this the best damn news show!

Previous Post: « A Supercut of Indiana Gov. Mike Pence Refusing to Say Whether He Supports Anti-gay Discrimination: WATCH
Next Post: Apple CEO Tim Cook Slams Discriminatory ‘Religious Freedom’ Laws: ‘America Must Be A Land of Opportunity for Everyone’ »