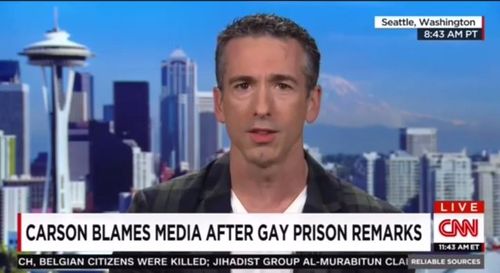 Following Dr. Ben Carson's remarks this past week that being gay is a choice because "a lot of people who go into prison go into prison straight — and when they come out, they're gay," Dan Savage penned an open letter to the 2016 GOP hopeful inviting the neurosurgeon to "suck my d–k."

If being gay is a choice, prove it. Choose it. Choose to be gay yourself. Show America how that's done, Ben, show us how a man can choose to be gay. Suck my d–k. Name the time and the place and I'll bring my d–k and a camera crew and you can suck me off and win the argument.

Sometimes you have to fight fire with fire….[Carson has] compared gay people to child rapists, to people who have sex with animals, necrophilia…He really says the vilest and most disgusting things about gay people. And sometimes to get the attention of someone like that, to really make it clear to them how low and disgusting they're being, how vile they're being, you have to meet them on the field where they're doing battle and take them on.

Previous Post: « Anti-Gay OK Senator Says He’ll Always Protect Your Right To Be Homosexual (And Be Discriminated Against)
Next Post: Australian Anti-Gay Marriage Ad Warns Parents to ‘Think of the Child’ – VIDEO »