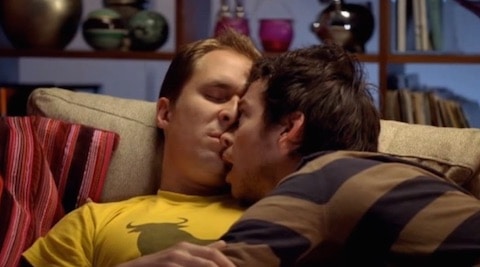 Australian TV viewers have made official complaints that an advert for Maltesers in which two men kiss promotes homosexuality, reports Business Insider.

The advert, which has been running without problems in the UK and other markets for years, portrays two heterosexual men snuggling up unawares while sleeping.

Complaints to Australia’s Advertising Standards Bureau (ASB) have accused the ad of encouraging young people to be gay and of ridiculing gay people.

One of the complaints reads:

"I find it very offensive that while I'm watching tv with my child that an ad with a man kiss another man to come on to try and sell chocolates just like smoking and drinking alcohol leads to young people to do these things I feel strong that advertising homosexuals is try to turn young people gay."

"The two women place their boyfriends in a sexual/suggestive position while they are asleep. They are seen to kiss. The two women then laugh at what they have done. This ad is offensive because it continues to perpetuate the idea that being gay or male closeness is something to be ridiculed and laughed at."

In response to the complaints, Maltesers owner Mars Confectionery said of the “playful” ad that it would be inappropriate given the context to assume the men are of any kind of sexual orientation.

The ASB dismissed the complaints, ruling that the depiction of two men kissing would encourage young people to turn gay was an "unlikely interpretation and not one that is likely to be shared by the broader community."

On the issue that the ad promoted the idea that being gay or male closeness was something to be ridiculed, the ASB said the practical joke carried out in the ad is "not a derogatory sentiment toward homosexual men and did not depict material which discriminates against or vilifies a person on account of sexual preference."

Its worth noting that the men don't actually kiss in the ad.

Watch the offensive item, AFTER THE JUMP…

Previous Post: « If You Think Your Job is Stressful, Listen to the Man Who Landed a Spacecraft on a Comet: VIDEO
Next Post: Chicago Uber Driver Charged With Assault After Dumping Kissing Gay Men From Cab: VIDEO »