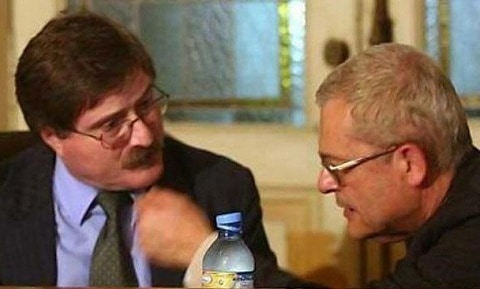 Two judges in Argentina have given a pedophile a reduced sentence because his 6-year-old victim had already been sexually abused and showed “homosexual tendencies”, reports The Daily Beast.

Court papers show that judges Horacio Piombo (above right) and Benjamin Ramon Sal Llargues (above left) reduced the sentence of soccer club coach Mario Tolosa who in 2010 was charged with raping the unnamed boy. Tolosa’s sentence was reduced from six years to 38 months because the boy was used to such abuse from his father.

Pablo Fracchia, a social worker and campaigner for gay-rights organization All Out in Buenos Aires, said:

“We need to make sure the judges don’t say to the world that being gay is a reason to be raped. What they’re saying is, ‘Hello rapist, if you want to rape someone, rape someone who’s been raped before.’

“We have a very shady judicial system. We have judges who still came from the dictatorship. It’s supposed to be that the second level and supreme court are good enough to correct most of these crazy things, but sometimes they’re also as crazy as the first level.”

The two judges have a long record of reducing sentences for sexual and gender-based crimes. In the past, they have justified a pastor’s rape of two teenage girls because they belonged to a lower economic class, lowered the sentence of a man who raped his daughter because she gave contradictory statements in court and reduced the sentence of a man who murdered his wife from 17 years to 10 because the woman’s attitude was “almost provocative”.

“It’s repugnant to say that the presumed sexual orientation of an abused 6-year-old boy is a reason to reduce the sentence of the abuser”.

Piombo has since been fired from his post as a lecturer at the University of Mar del Plata. 32,000 people have signed a Change.org petition to speed up the judges’ dismissal.