The first federally approved monument honoring LGBT veterans will be dedicated later this month at the Abraham Lincoln National Cemetery in Elwood, Illinois 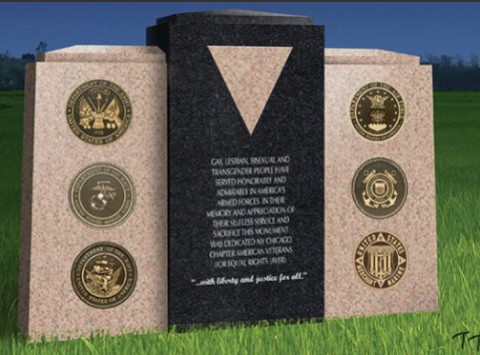 Spearheaded by Stanley J. Jenczyk, a junior board member of the Chicago chapter of the American Veterans for Equal Rights (AVER), the monument was approved late last year by the Department of Veterans Affairs Acting Undersecretary of Memorial Affairs.

“I've waited for four long years to see this monument for LGBT veterans come to fruition. This ceremony will be a fulfillment of America's promise of honoring all who have served in every branch of the military."

"This is the first monument for LGBT veterans created by LGBT veterans that will be dedicated at any cemetery in the National Veteran's Cemetery System. I never believed anything like this could've happened because we've been discriminated against for so long in many areas of life including the military with the now-defunct Don't Ask, Don't Tell policy. This ceremony is going to be an incredibly emotional experience for all of us."

The monument will be inscribed with the words, "Gay, lesbian, bisexual and transgender people have served honorably and admirably in America's armed forces. In their memory and appreciation of their selfless service and sacrifice, this monument was dedicated by Chicago Chapter American Veterans for Equal Rights 'AVER' (…with liberty and justice for all )."

The ceremony will take place at 2 pm on May 25th.

Watch a clip of the AVER Chicago 2014 annual Veterans Day Dinner, AFTER THE JUMP…

Last year, the design was revealed for a memorial to gay veterans in Congressional Cemetery's 'gay corner' on Capitol Hill.

Openly transgender individuals continue to be banned from serving in the military.