On May 22nd, Ireland will become the first country in the world to vote on same-sex marriage. The latest poll shows 78% of voters are in favor of passing the amendment.

In a wide-ranging article, BuzzFeed's J Lester Feder says that anti-equality activists have been paying close attention to the referendum, including Brian Brown of the National Organization for Marriage. Brown has apparently discussed the situation with the leader of Ireland’s ‘No’ campaign and U.S. activist Frank Schubert.

A strong network of anti-gay European groups has also been involved in the campaign, including French group Manif Pour Tous (MPT) and Italian activist Luca Volante.

Volante and MPT have also been involved with Brown’s attempts to create an International Organization for Marriage. 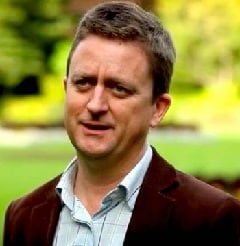 “The tactics of the No campaign — which is built around the argument that children will be harmed if same-sex couples are allowed to wed — look disturbingly familiar for American LGBT rights advocates, who are watching the Irish vote carefully. This is exactly the kind of messaging that ate away at support for marriage equality in the Proposition 8 campaign, and they believe it has the fingerprints of the conservative group that pulled off that upset victory, the National Organization for Marriage (NOM).

“The No side denies that it is borrowing tactics from California, saying it’s learned more from campaigns in eastern European countries like Slovenia in 2012 or Croatia in 2013, where referendums were passed curtailing partnership rights for same-sex couples.

“‘We wouldn’t be taking too many more lessons from Prop 8 than from elsewhere,’ said David Quinn [above right], head of the Iona Institute and adviser to Mothers and Fathers Matter.

“But the No camp has gotten some input from veterans of the California campaign and other marriage fights abroad. Frank Schubert, the conservative political consultant credited with the Proposition 8 victory, told BuzzFeed News before an NOM rally in Washington earlier this month that he has sent private polling, focus-group work, and other messaging guidance to activists on the No side. NOM President Brian Brown also said he had ‘talked a lot’ to Quinn periodically over the past few years, though they hadn’t communicated in over a year.

“Quinn said the Iona Institute’s only substantial international funding has been €24,000 over the past few years from an Italian foundation headed by a former member of the European Parliament, Luca Volonté, who sits on the board of the conservative online campaign platform CitizenGo along with NOM’s Brian Brown. But none of that money has gone to the referendum campaign, Quinn said.”

Watch the Iona Institute’s most recent anti-equality video, AFTER THE JUMP…