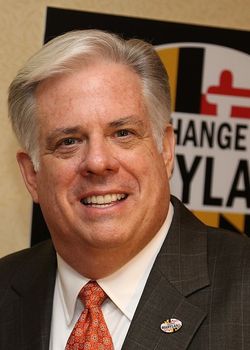 One of the proposals requires health insurers to offer fertility treatments as a benefit regardless of a person’s sexual orientation, while the other allows transgender residents to change the gender on their birth certificates.

The House and Senate approved the legislation by wide margins earlier this year, and the LGBT community was watching carefully to see what Hogan (R) would do.

Set to go into effect on June 3rd, the measures were passed without the support of Governor Larry Hogan (right).

A spokesman for Hogan says that he has decided to neither sign nor veto the bills, thereby allowing them to take effect on their own.

Although he called for “tolerance and respect” in his 2014 inauguration, Hogan has so far mostly stayed away from divisive issues.

“We’re really happy. These are bills that we worked very hard on, and they had bipartisan support in the General Assembly.

“It seems like [Hogan] doesn’t come in with a very entrenched opinion on social issues and that he really is looking at each bill individually.

“With a lot of the measures we’re supporting that don’t cost money, I think he’s going to support them. I think he’ll continue with a sort of fiscal-economic lens, and if we put forward something that would cost the state millions of dollars, he probably wouldn’t support it then.”