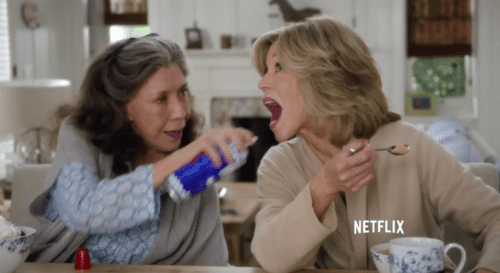 Netflix has renewed Grace and Frankie, the Jane Fonda – Lily Tomlin half-hour comedy for a second season, according to The Hollywood Reporter:

Grace and Frankie stars Jane Fonda and Lily Tomlin – their first project together since the 1980 comedy 9 to 5 – as two frenemies who are thrust into each other’s lives when their husbands leave them for each other. Sam Waterston, Martin Sheen, Brooklyn Decker, June Diane Raphael, Ethan Embry and Baron Vaughn round out the cast. Marta Kauffman co-created the series with Howard J. Morris, who both exec produce with Fonda, Tomlin, Paula Weinstein, Dana Goldberg, David Ellison and Marcy Ross.

How did everyone like the first season of Grace and Frankie?