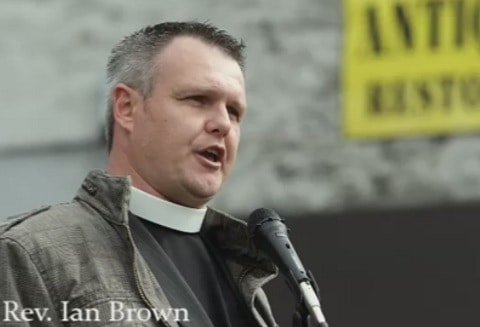 A Northern Ireland pastor has said that god is using ISIS and homosexuality to punish Europe, reports the Londonderry Sentinel.

The message that has sparked the current media controversy. Featured on Nolan Show this morning.

Posted by Martyrs Memorial Church on Thursday, 28 May 2015

Brown said God punished Europe with the Nazis because of its greed, covetousness and wickedness prior to World War II and that this is happening again:

“That’s why the dark specter of ISIS is closing in on us today from the east and homosexuality closing in from the west, including ourselves as part of the west.

“God is saying something through this. He is shaking the nations. This is his method through history. And he is shaking his Church. He shakes us up to send us back to himself.

“In the west, do you know what army is on the march? It’s the sodomites. I’m not saying that they all view themselves as blitzkrieg foot soldiers but I’ll tell you what, the liberal elite are only too happy to use them, fund their causes, push their rights, promote their aims and today in our Western world they are sweeping through the states of America compelling the states to capitulate and legislate in favour of same-sex marriage.

“And one state is falling like the next like a row of dominoes going down and they’re being supported right up to the highest powers by Barack Obama, he’s complicit, like many others are in all of this.”

Meanwhile, Reverend Jonathan Campbell of Newbuildings Methodist Churchhas said that there is a “sinister agenda at work” in the push for same-sex marriage in Northern Ireland and the popular vote in favor of marriage equality in the Republic of Ireland last weekend.

“It’ll be just a case of getting one foot in through the door and rest assured that they’ll go all out to bring it in up here. So we need to pray about that because the darkness is [in the Republic of Ireland] too.

Please sign and encourage others to do the same

Posted by Newbuildings Independent Methodist Church on Thursday, 21 May 2015

Norther Ireland is the only part of the United Kingdom without marriage equality.