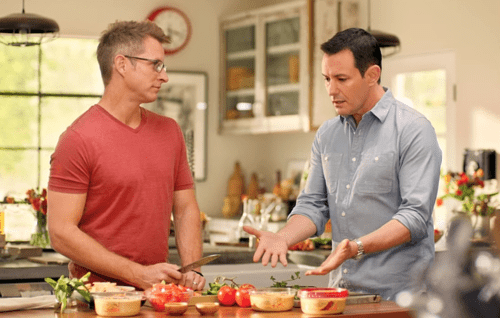 Sabra Hummus has launched a new 60-second spot featuring three couples, one of which happens to be real-life married couple Larry Sullivan (right) and Dave Monahan.

Sullivan and Monahan are both actors (you might recognize Sullivan from his roles on Modern Family, CSI, or Will & Grace and Monahan from Crossing Jordan or – way back – Dawson's Creek, though both have appeared in dozens of roles in TV and film).

We asked Sullivan, a longtime Towleroad reader, for a bit of behind-the-scenes commentary on how a commercial spot like this, with a real-life couple (and it's not the first time for them), comes about.

"I got a call for an audition, just like any other. They were looking for a same-sex couple for a Sabra Hummus spot. Not necessarily a real life gay couple, but I asked my agents if I should bring Dave, anyway. My agents called the casting directors, who know both of us, and they said, 'Absolutely.' So, we both went on the first audition together. Actually, I remember being paired up with someone else, since there was a large group of actors there, and asking, 'Is it okay if I go in with my legal husband instead?' They laughed."

After the first audition and callback for the director and agency they got the spot.

"They were looking for chemistry and history more than anything and I guess we just had that, naturally, after almost 14 years together," adds Sullivan. "We really DO buy that Hummus. Our son loves it, too.They weren’t trying to make any kind of statement or anything, we just got the job as 'another couple in one of the vignettes.' I LOVE how much things are changing…have changed. Let’s hope we keep moving forward."