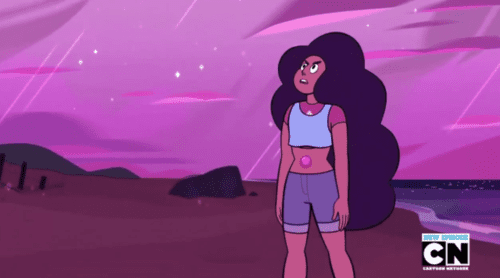 In the two seasons that Steven Universe has been airing on Cartoon Network, the show’s built up a solid base of fans who fell in love with the show for its strong, diverse cast of characters of color and various queer experiences. Steven’s three, alien guardians–collectively known as the Crystal Gems–raise him in a non-traditional family along with his father after his mother, another crystal gem, sacrifices herself to create the boy. A recurring plot device that runs through the show is the concept of gem fusion, a process where two gems fuse their bodies, minds, and identities to create a new, stronger person.

“Alone Together,” one of the more interesting episodes of the series centers around Steven’s first experience fusing with someone else–his friend Connie. The fusion was a first for the show for a number of reasons. Steven, who’s half gem, had never fused before, let alone with another human. It also bears mentioning that Steven and Connie explicitly identify male and female when separated. Their fusion, Stevonnie, deepened the way that many fans understood some of its core characters, something that Steven Universe creator Rebecca Sugar was keenly aware of.

In an interview with io9 promoting the upcoming Steven Universe Guidebook, Sugar shared some of her deeper thoughts about Stevonnie’s creation and impact on the show.

“Stevonnie is an experience,” she explained. “The living relationship between Steven and Connie. What I love about Stevonnie is that we are working with a metaphor that is so complex and so specific but also really, really relatable, in the form of a character.”

“Stevonnie challenges gender norms as an individual, but also serves as a metaphor for all the terrifying firsts in a first relationship, and what it feels like to hit puberty and suddenly find yourself with the body of an adult, how quickly that happens, how it feels to have a new power over people, or to suddenly find yourself objectified, all for seemingly no reason since you’re still just you… and they are still just them, they’re Steven and Connie who you already know and relate to, and if you do you can feel, for this episode, what all of those feelings are like.

And they feel it too and that stays with them. I knew that was bound to be interesting to people, for at least one of all those reasons!”