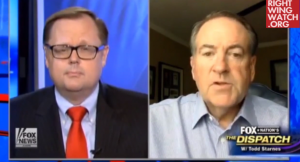 Mike Huckabee, speaking with Fox News pundit and fellow sack of mud Todd Starnes last week, once again hinted that civil disobedience may be the appropriate response to a pro-equality Supreme Court ruling on marriage.

Said the 2016 contender on Fox Nation’s The Dispatch:

“The question comes do we have civil disobedience or do we have biblical disobedience? And for many of us civil disobedience, when we believe civil government is acting outside nature and nature’s god, outside of the bounds of the law, outside of the bounds of the Constitution, we believe it’s the right and moral thing to do. Now yes I understand that’s a very controversial thing to say. But Todd, what if no one had acted in disobedience to the Dred Scott decision of 1857? What if the entire country had capitulated to judicial tyranny and we just said that because the Supreme Court said in 1857 said that a black person wasn’t fully human? Suppose we had accepted that, suppose Abraham Lincoln, our president, had accepted that, would that have been the right course of action?”

Previous Post: « Mindblowing Video Asks ‘What Would Life Be Like Without The Internet?’ – WATCH
Next Post: Sen. Lindsey Graham to Urge South Carolina to Take Down Confederate Flag on State Grounds »