Activist group Queer Nation is planning to fly a banner over Fire Island Pines on Sunday urging a boycott of establishments owned by gay hotelier Ian Reisner, who it was revealed last week had lied about previously donating the maximum campaign contribution to Ted Cruz after hosting a dinner reception for the presidential hopeful at his Manhattan penthouse. 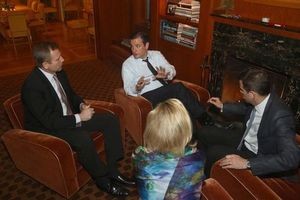 “Two gay business owners are making money off of the LGBT community at a world-famous gay vacation spot and then giving that money to outspoken anti-LGBT politicians,” said Ken Kidd, a member of Queer Nation, the gay rights group that orchestrated the flyover. “Our community is out to win comprehensive federal legislation that will make LGBT Americans fully equal under the law. We will not be taken backward by funding anti-LGBT politicians.”

As a result, in part, of Queer Nation’s ongoing campaign for comprehensive civil rights legislation, a bill that would give all the rights and protections currently extended to all Americans to LGBT people will be introduced in the current Congress.

“Even if we win marriage equality in all 50 states at the US Supreme Court this month, a majority of LGBT Americans will still face discrimination in employment, housing, public accommodations, and other areas,” continued Kidd. “Our community will continue to speak out against anyone—including gay men—who fund any opposition to comprehensive civil rights for LGBT Americans. Doing without a cocktail at Tea is a small sacrifice to make.”

Previous Post: « These are the Top 25 Beaches in the World and the Beautiful Men We Found at Them: PHOTOS
Next Post: Titus Heads to Litchfield Prison in Mash Up of ‘Unbreakable Kimmy Schmidt’ and ‘Orange is the New Black’ – WATCH »