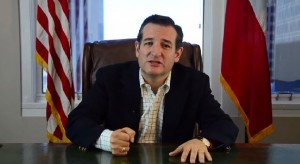 Wondering why Ted Cruz was curiously absent from the list of 2016 GOP candidates who gave their initial, bitter reactions to yesterday’s historic ruling on marriage equality?

Turns out he was penning his master plan to oust Ruth Bader Ginsburg and the rest of the “lawless” liberal Justices on the Supreme Court.

Wrote Cruz in an article published for National Review:

This week’s opinions are but the latest in a long line of judicial assaults on our Constitution and the common-sense values that have made America great. During the past 50 years, the Court has condemned millions of innocent unborn children to death, banished God from our schools and public squares, extended constitutional protections to prisoners of war on foreign soil, authorized the confiscation of property from one private owner to transfer it to another, and has now required all Americans to purchase a specific product, and to accept the redefinition of an institution ordained by God and long predating the formation of the Court. […]

The time has come, therefore, to recognize that the problem lies not with the lawless rulings of individual lawless justices, but with the lawlessness of the Court itself. The decisions that have deformed our constitutional order and have debased our culture are but symptoms of the disease of liberal judicial activism that has infected our judiciary. A remedy is needed that will restore health to the sick man in our constitutional system.

Rendering the justices directly accountable to the people would provide such a remedy. Twenty states have now adopted some form of judicial retention elections, and the experience of these states demonstrates that giving the people the regular, periodic power to pass judgment on the judgments of their judges strikes a proper balance between judicial independence and judicial accountability. It also restores respect for the rule of law to courts that have systematically imposed their personal moral values in the guise of constitutional rulings.

Cruz also gave his initial reaction to yesterday’s ruling on Sean Hannity’s radio show, with the Tea Party favorite saying “today is some of the darkest 24 hours in our nation’s history.”

Listen to the audio below: