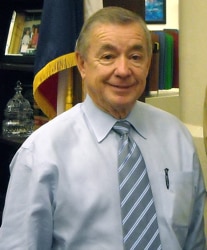 Ten years after Texas voters approved the state’s anti-gay marriage amendment, the author of the measure says it’ll be “a sad day” when the U.S. Supreme Court strikes it down.

GOP former Rep. Warren Chisum (right), who served in the Texas Legislature from 1989 until 2013, told The Lubbock Avalanche-Journal:

“It’ll be a sad day for American values. It’s a sad day when the court decides to meddle into religious affairs and destroy marriage, destroy the foundation of family life.”

The newspaper notes that Chisum’s opinion appears to be shared by most Republicans in the state, including current GOP Rep. John Smithee of Amarillo, who said it will be “a real shame” if Chisum’s amendment is overturned:

“In my district, it was about 85 percent in favor of it,” he said. “To think that five justices in the Supreme Court can undo in a 5-4 decision what 85 percent of the people voted for, it is bothersome in the democracy that we live in.”

Seventy-six percent of voters statewide approved the marriage amendment. However, turnout was only 18 percent in the off-year special election. And of course, public opinion has changed dramatically since then. One recent poll conducted by Texas Tech University (which happens to be in Lubbock), found that more Texans support same-sex marriage than oppose it. But in any case, the “real shame” is that a majority of voters were allowed to deprive a minority of their civil rights, which isn’t supposed to happen in “the democracy we live in.”