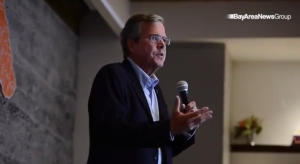 An employee who identified himself to Bush as being gay asked about Bush’s position on legislation to ban discrimination of LGBT Americans. “I don’t think you should be discriminated because of your sexual orientation. Period. Over and out,” he replied.

Bush continued: “The fact that there wasn’t a law doesn’t necessarily mean you would have been discriminated against.” He added that in the wake of the Supreme Court decision to legalize same-sex marriage nationwide, the country must work to carefully balance the rights of those seeking to marry and the religious beliefs of those who oppose those unions.

Citing the frequently-used example by religious freedom advocates, Bush said that in the case of a florist approached by a gay couple, “you should be obligated to sell them flowers, doing otherwise would be discriminatory.” But he said that the objecting florist should not be required to participate in the wedding, a fine line that he hopes will appeal to all sides of the debate.

When the employee followed up to ask specifically whether he would support anti-discrimination laws for LGBT Americans for their housing and employment—the next target for gay rights marriage advocates—Bush said he would at the state level.

“I think this should be done state-by-state, I totally agree with that,” he said.

“Guided by my faith, I believe in traditional marriage.  I believe the Supreme Court should have allowed the states to make this decision.  I also believe that we should love our neighbor and respect others, including those making lifetime commitments.  In a country as diverse as ours, good people who have opposing views should be able to live side by side.  It is now crucial that as a country we protect religious freedom and the right of conscience and also not discriminate.”