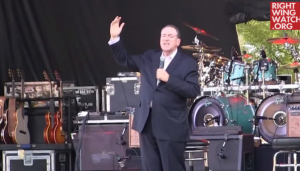 1975, the wife of evangelist Billy Graham said that ‘if God does not bring his judgment upon this land, He will have to apologize to Sodom and Gomorrah,’ She said that 40 years ago. What would she say today if she was still alive? When the Supreme Court just two weeks ago, or as I call them, the Extreme Court, made the most radical decision when it comes to the definition of marriage, it truly was a remarkable day in which they did not vote for equality of something, they voted for the redefinition of something.

Huckabee went on to criticize President Obama for becoming the “chief cheerleader” for same-sex marriage.