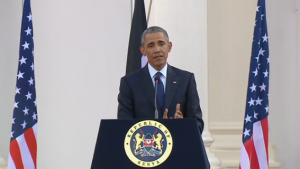 At a joint news conference with Kenyan President Uhuru Kenyatta in Nairobi today, President Obama made good on his plan to discuss the issue of gay rights in Africa.

Linking LGBT discrimination in Africa to the history of Jim Crow laws in America, Obama said ensuring gay rights must be a priority on a continent — and in a country — where bias against gays is accepted, and violence against gays is common. […]

“As an African-American in the United States, I am painfully aware of the history of what happens when people are treated differently under the law,” Obama said. “There were all sorts of rationalizations that were provided by the power structure for decades in the United States for segregation and Jim Crow and slavery, and they were wrong.”

He added, “When you start treating people differently not because of any harm they are doing to anybody, but because they are different, that’s the path whereby freedoms begin to erode.”

Kenyatta, however, dismissed gay rights as a “non-issue” in his country and said people are more concerned with other issues like public health, adding more women in the workplace, and education.

“It is very difficult for us to be able to impose on people that which they themselves do not accept,” Kenyatta said.

Politico notes Kenyatta’s remarks “were the ones that drew applause among the Kenyan audience.”

Homosexuality is punishable in Kenya by up to 14 years in prison.