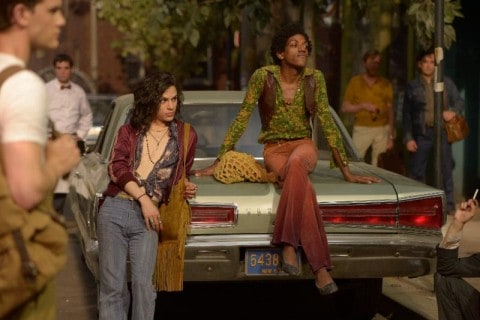 Stonewall was written by Jon Robin Baitz (Other Desert Cities), and Emmerich (Independence Day, The Day After Tomorrow) directed the film. Both writer and director are gay. Actors include Jeremy Irvine, newcomer Jonny Beauchamp, Jonathan Rhys Meyers and Ron Perlman.

“I was always interested and passionate about telling this important story, but I feel it has never been more timely than right now … It was the first time gay people said ‘Enough!’ They didn’t do it with leaflets or meetings, they took beer bottles and threw them at cops. Many pivotal political moments have been born by violence. If you look at the civil rights movement, at Selma and other events of that kind, it’s always the same thing. Stonewall was the first time gay people stood up and they did it in their own way. Something that really affected me when I read about Stonewall was that when the riot police showed up in their long line, these kids formed their own long line and sang a raunchy song. That, for me, was a gay riot, a gay rebellion.

What struck me was that there was a story in there, which I felt had an important message – it’s the people who had the least to lose who did the fighting, not the politically active people. It was the kids that went to this club that consisted of hustlers and Scare Queens, and all kinds of people that you think would never resist the police, and they did it.”

The film was shot in the Montreal area, where Emmerich and the Stonewall team recreated late ’60s Greenwich Village. The film’s characters are, for the most part, fictionalized.