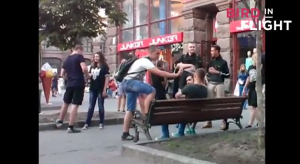 Earlier this month, we showed you dramatic footage of a social experiment in which two men held hands and walked through the streets of Moscow, Russia to gauge the public’s attitudes towards homosexuality. Reactions to the stunt couple ranged from not even noticing to uncomfortable glances to verbal and even physical abuse.

After the video went viral, Bird in Flight, an online magazine dedicated to visual culture, decided to recreate the experiment in neighboring Ukraine. Like in Russia and many other Eastern European countries, homosexuality is viewed as a social taboo in the Ukraine and gays are frequent targets of right-wing extremist groups. Back in June, the country’s second gay pride rally in the capital of Kiev turned violent after several dozen neo-Nazi assailants attacked attendees and police.

Reactions to real-life couple Tymur and Zoryan walking the streets of Kiev holding hands were mostly muted, and many bystanders seemed more amused than upset. That wasn’t the case however when Tymur decided to sit on Zoryan’s lap in a popular city park. The two were approached by a dozen or so neo-Nazis things quickly escalated.

Wrote Tymur of the experience:

We can see that most of the people have a neutral opinion, they show no particular interest. This proves that the confrontation is between the two minorities. The only problem is that one of the minorities is excessively aggressive. I think that law enforcement should start the so called ‘safari’ on aggressors, because the latter are discriminating against Ukrainians, popularizing violence and are making it clear with their actions and statements that law enforcement is insignificant to them and the aggression will remain unpunished.

Of course, in real life Tymur and I (and we’ve been together for almost 4 years) never sit on each other’s lap, and we don’t even hold hands. We don’t feel the need for it. When we were walking around Kyiv like this for an hour, we did not notice any openly aggressive reactions. Most people who even paid attention to us simply could not believe what they were seeing. We decided to act a bit more provocatively: I sat on a bench on Khreshchatyk Street, and Tymur sat on my lap. Of course, we were ready for everything, especially after our March for Equality experience.

It didn’t take long for the homophobes to come. Well, you can see it all in the video. It is interesting that the percentage of these guys in our society is similar to the percentage of gays if not smaller – 3-5%. The others don’t care, and even if they do, they will never resort to violence. We are not trying to impose anything on people or change the world to fit us. We only want to have our rights as the citizens of this country wholly fulfilled and we want to contribute to its development, while not being afraid of discrimination and violence.

Watch the shocking footage for yourself below:

Previous Post: « ‘History of Prostitution’ Most Likely Cause of Transgender Florida Woman’s Murder, Say Police
Next Post: Want to Know More About the LGBT Equality Act And Whether It’ll Pass? Rachel Maddow Has You Covered – VIDEO »