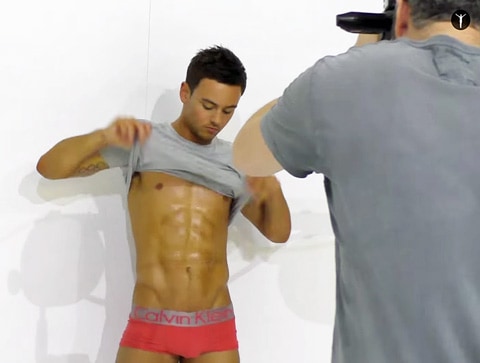 Out British diver Tom Daley says he always knew he was attracted to guys but didn’t realize he was gay until he met Dustin Lance Black.

Eighteen months after Daley came out in a YouTube video, he says he’s as focused as ever on diving, and looking forward to the possibility of winning a gold medal at the 2016 Summer Olympics. 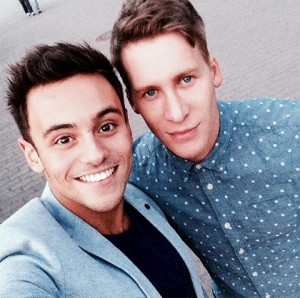 Daley also says he’d like to eventually get married and raise several children with Black, whom he credits for helping to bring marriage equality to the US. These are just a few of the revelations in a lengthy interview Daley did recently with The Guardian.

Daley talks about how he slipped into a depression after winning a bronze medal in 2012, but got back on his feet when he moved to London, where Black also now spends most of his time. Today, Daley is enmeshed in a relentless training schedule, including the same food every day and a daily bedtime of 10 p.m. He’s preparing to compete in the World Aquatic Championships beginning next week.

“I feel much more mature going into 2016 than 2012,” he says, having completed his morning diving session. We’re sitting in the auditorium above the diving pool. Daley has changed from trunks to shorts, salmon-pink T shirt and trainers, and is talking about why Rio should come at the perfect time for him. “Divers tend to peak between 22 and 24,” he says. “I’ll be 22, so I should be approaching mine. I am stronger now, jumping higher, spinning faster, moving quicker than I ever have. I’m in love with diving right now.”

Daley says coming out was a huge weight off his shoulders, and he encourages other gay athletes to do so, especially professional footballers:

“Nobody batted an eyelid when I did. Nobody cares. I think lots of people do worry in sport, but they would be so surprised if they did come out. I don’t think it is as big an issue as people think.”

Asked about meeting Black and coming to terms with his sexuality, Daley says:

“I guess it has always been in the back of my head, but you never really know. I’d never had feelings for a person along those lines. I’d been in relationships with girls where I’d had sexual feelings, but it became so much more intense when I met Lance. I thought, ‘Whoa, this is weird. Why am I having these feelings for somebody?’

“I always knew that I had that attraction to guys, but I just thought that was a usual thing, being attracted to guys and girls. It was only when I met Lance I started having such strong feelings.”

Read the full interview here. Watch Daley’s coming out video, as well as his new dive, The Firework, below.

Previous Post: « Gay Man Says He Was Denied Communion At Mother’s Funeral Mass Because He’s In A Same-Sex Marriage
Next Post: Stockton, California PD Reaches Out To LGBT Community In Wake of Lieutenant’s Hateful Anti-Gay Letter »