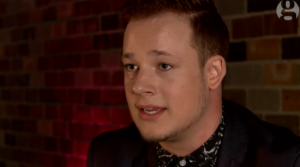 Greg Gould, who was runner-up in the 2013 Australia’s Got Talent competition, has come out as gay ahead of the release of his debut single “Run to You.”

Throughout Gould’s run on the show no reference was made to his sexuality. But in the post-reality show scramble for managers and label deals, no one in the industry seemed to know what to do with him. He was consistently told to either hide his sexuality or go the opposite way – become the movement’s poster boy, be “really fabulous”.

“I’m not – ” Gould breaks into a hyper-camp impression, “Hello! I’m going to be the poster boy for gay people! … I’m not that person,” he says emphatically.

And yet, with his ambitious campaign to support marriage equality called #keeprunning (“Now is not the time to slow down, we need to keep running towards marriage equality,” he says) he is becoming a poster boy of sorts. Just without bearing the badge of a “gay musician”, merely a musician who happens to be gay.

Gould also shared in the interview his frustration with Australia dragging its feet on the issue of same-sex marriage:

“I’m just sick of these excuses. You can put eggs in any basket but at the end of the day there are people in this country that are adding plenty of value to the community, that have so much love to give, but they’re being denied the right to marry who they love….When I hear someone say you can’t marry another man, it’s dehumanising. It’s saying, ‘We can’t give you the same certificate. We can’t credit your love the same as somebody else’s.'”