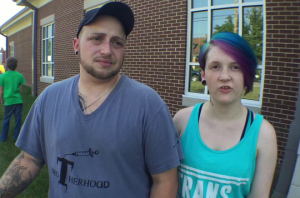 In the multitude of court filings during her anti-gay crusade, Rowan County clerk Kim Davis liked to repeatedly bring up the “searing act of validation” that would “forever echo in her conscience” should she have to bear witness to any marriage that isn’t a 100% Bible-based man-women heterosexual union.

Well let the echoing begin because it turns out she inadvertently signed off on a marriage license to a transgender man and pansexual woman back in February. 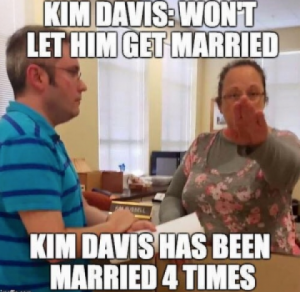 Camryn Colen, who is transgender, and his wife Alexis, who identifies as pan sexual, said Davis’ office provided the license on Feb. 26 without asking to see Camryn’s birth certificate, which still identifies him as female. The couple married that night.

In an interview with The Independent Camryn said he and his wife saw Davis there but didn’t exchange any words with her:

“I saw Kim Davis, but I didn’t talk to her. We went in there just as any other straight couple would,” said Camryn Colen, 30. “That night we had an official do a tiny, little testimony.”

In related news, people have begun showing up at the Rowan County Courthouse this morning to voice their support for (or frustration with) Davis:

Supporters for both sides starting to show up outside Rowan Co Courthouse pic.twitter.com/N6u5o9kzFQ

The stay on a federal judge’s order for Davis to issue marriage license to same-sex couples expires today. Davis has petitioned the U.S. Supreme Court for an extension on the stay so that she can appeal the ruling further.

The Rowan County Attorney’s Office meanwhile has filed a charge of official misconduct against clerk Kim Davis for her repeated refusal to issue marriage licenses to same-sex couples despite the federal order.

Watch Camryn Colen and Alexis talk about getting their marriage license in the video below: