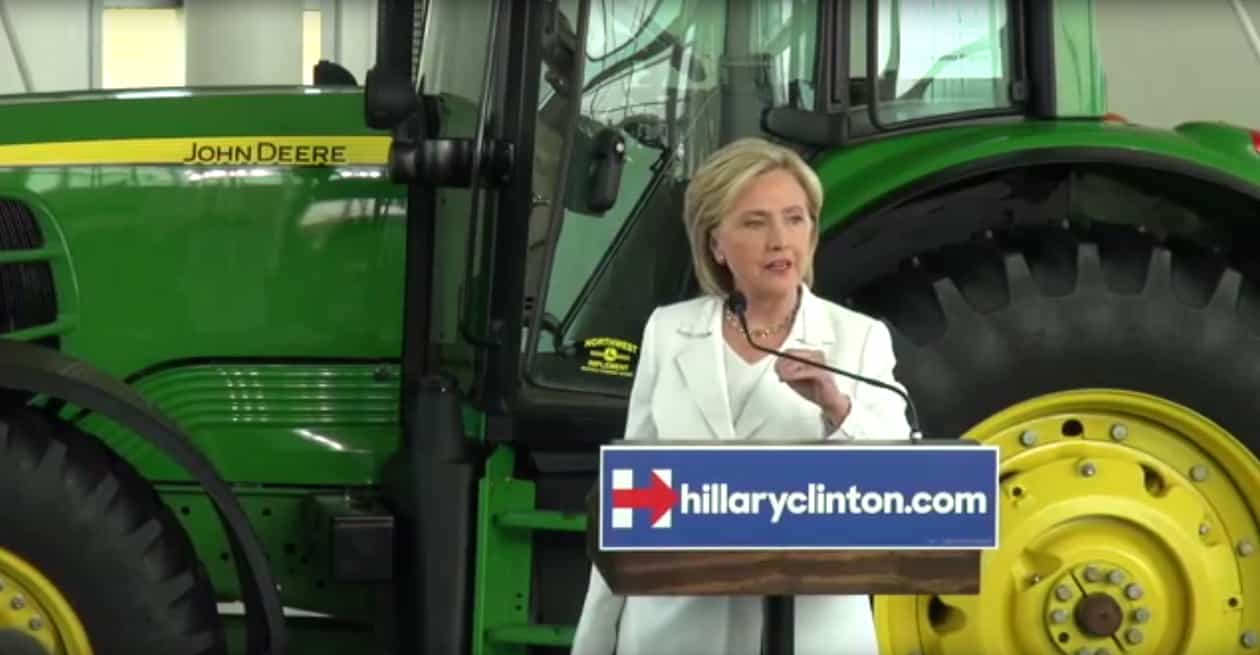 Democratic Presidential candidate and former Secretary of State Hillary Clinton spoke out in Iowa today about the brutal on-air killings of two journalists in Central Virginia early this morning.

Clinton was visibly stirred by the tragic killings, and urged, “We have got to do something about gun violence.” Said Clinton,

“First of all, I was so just stricken to think that these two young people doing the work that you guys do every single day would be murdered on live television. And I will extend my condolences and sympathies to their families and coworkers and pray for the women who last I checked was still in critical condition. But I will also reiterate that we have got to do something about gun violence in America. And I will take it on. There are many people who face it and know it but then turn away because it’s hard. It’s a very political, difficult issue in America, But I believe we are smart enough, we are compassionate enough to figure out how to balance the legitimate second amendment rights with preventive measures and control measures so that whatever motivated this murderer, who eventually took his own life, we will not see more deaths–needless, senseless deaths.

So yes I feel just great heartache at what happened and I want to reiterate how important it is we not let yet another terrible instance go by without trying to do something more to prevent this incredible killing that is stalking our country. And we’ve had so many terrible instances of it in the last two years. But it happens everyday–intentional, unintentional, murder, suicide. It happens everyday and there is so much evidence that if guns were not so readily available, if we had universal background checks, if we could just put some time out between the person who’s upset because he got fired, or the domestic abuse or whatever other motivation may be working on someone who does this, that maybe we could prevent this kind of carnage.

I hope that in addition to expressing sympathy for those directly affected that this is maybe, for the media, for the public, for elected officials, for every American, what it hopefully will finally take for us to act.

Heartbroken and angry. We must act to stop gun violence, and we cannot wait any longer. Praying for the victims' families in Virginia. -H

We also learned Wednesday that the suspected killer of WDBJ journalists Alison Parker and Adam Ward sent a manifesto to ABC News in which he claimed that he faced discrimination at WDBJ for being black and gay. He also went on to express praise for perpetrators of mass shootings:

He writes what triggered today’s carnage was his reaction to the racism of the Charleston church shooting: “Why did I do it? I put down a deposit for a gun on 6/19/15. The Church shooting in Charleston happened on 6/17/15…” “What sent me over the top was the church shooting. And my hollow point bullets have the victims’ initials on them.” It is unclear whose initials he is referring to. He continues, “As for Dylann Roof? You (deleted)! You want a race war (deleted)? BRING IT THEN YOU WHITE …(deleted)!!!” He said Jehovah spoke to him, telling him to act. Later in the manifesto, the writer quotes the Virginia Tech mass killer, Seung Hui Cho, calls him “his boy,” and expresses admiration for the Columbine High School killers. “Also, I was influenced by Seung–Hui Cho. That’s my boy right there. He got NEARLY double the amount that Eric Harris and Dylann Klebold got…just sayin.’” In an often rambling letter to the authorities, and family and friends, he writes of a long list of grievances. In one part of the document, Williams calls it a “Suicide Note for Friends and Family.” He says has suffered racial discrimination, sexual harassment and bullying at work –He says he has been attacked by black men and white females –He talks about how he was attacked for being a gay, black man.

Watch video of Hillary making her remarks about the tragic shooting, which begins at the 10:22 mark, below: