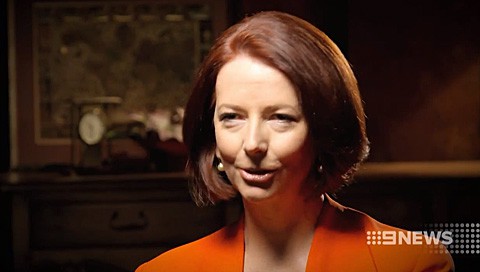 Former Australian PM Julia Gillard has made an about-face on the issue of marriage equality, telling a crowd in a speech at the College of Law and Justice in Melbourne that her “idiosyncratic” vote against same-sex marriage (while she had any power to do anything about it) was the wrong one. She said that if she were still in Parliament her vote for marriage equality would be “yes”.

Gillard’s previous position was that both opposite and same-sex couples should embrace civil unions.

Now she’s coming out against Prime Minister Tony Abbott’s push for a voter referendum on the issue.

Said Gillard: “Given the 1970s feminist in me saw much to be concerned with from a gender perspective with traditional marriage, I thought the better approach was not to change the old but to create something new…In my time post politics as key countries have moved to embrace same-sex marriage, I have identified that my preferred reform direction was most assuredly not winning hearts and minds.”

She added: “My position would have been overtaken by history, something which would have caused me no heartburn. Now, given the discussion of a plebiscite or a referendum, I find myself in a world where these assumptions have been upended.”

“The only foundation stone for the idea of a plebiscite or referendum is an appeal to the all-too-popular sentiment that politicians are inadequate, that their decision-making is somehow deficient. Enabling voters to express their views via the ballot box does not require a plebiscite or referendum. If all political parties had a conscience vote or clear policy, then in line with our normal democratic workings, people could question political candidates about same-sex marriage at the next election and decide to vote for a candidate who reflects their views. I also think it is important that the matter is now resolved through a conscience vote by the Parliament as promptly as possible after the next election so that no more potential twists and turns can loom up.”

Previous Post: « Pentagon to End Ban on Trans Service in May 2016
Next Post: Reporter and Cameraman Shot, Killed On Air In Central Virginia »