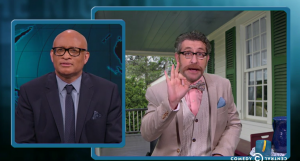 As we reported last week, Mississippi remains the only state in the nation to outright ban same-sex couples from adopting – a reality that may soon change as a federal lawsuit has been filed to overturn the ban.

In a segment called “So This Is the Hill You Want to Die On?” Nightly Show host Larry Wilmore asked Mississippi State Legal Council Beechum Grady why the state doesn’t want gay couples to adopt.

When asked to elaborate, Grady said:

Look Mississippi is trying to rebrand itself. From the Hospitality State to the Nostalgia State…We want to be the one place in America where the good old days of the 1950s never ended…If you go back far enough “gay” doesn’t exist yet. That is simple science.”