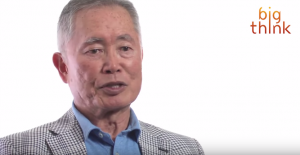 “I did very privately bring up the issue of gays and lesbians. And he was certainly, as a sophisticated man, mindful of that, but he said – in one episode we had a biracial kiss, Captain Kirk and Uhura had a kiss. That show was literally blacked out in the south, Louisiana, Alabama, Mississippi, Georgia didn’t air that; our ratings plummeted. It was the lowest rated episode that we had. And he said, “I’m treading a fine tight wire here. I’m dealing with issues of the time. I’m dealing with the civil rights movement, the Vietnam War, the Cold War and I need to be able to make that statement by staying on the air.” He said, “If I dealt with that issue I wouldn’t be able to deal with any issue because I would be canceled.” And I understood that because I was still closeted at that time. I talked to him as a liberal rather than as a gay man and I understood his position on that. So that’s the way Star Trek envisioned our future in the 23rd century, but I think we’re getting closer to that utopian society that Gene Roddenberry visualized, much more rapidly than even the technology.”

Previous Post: « ‘Stonewall’ Star Jeremy Irvine Says Film Does ‘Justice’ to the Real Story Behind the Riots
Next Post: Larry Kramer Speaks Out Against ‘Stonewall’ Boycott Efforts: ‘Don’t Listen to the Crazies’ »