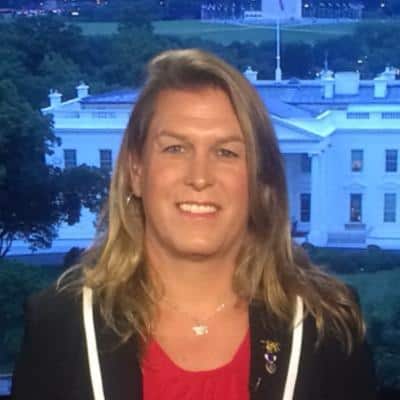 Transgender congressional candidate and former navy seal Kristin Beck declared that she’s “twice the man” that Mike Huckabee is in a tweet aimed at the presidential candidate after he made insensitive remarks regarding transgender service members. During the Republican debate last week Huckabee said that the military doesn’t need to accept transgender people and that the military is not up for some “social experiment”:

“The purpose of the military is to kill people and break things. It’s not to transform the culture by trying out some ideas that some people think would make us a different country and more diverse. The purpose is to protect America. I’m not sure how paying for transgender surgery for soldiers, sailors, airmen, Marines makes our country safer.”

As The Daily Beast reports, Beck heard Huckabee’s comments loud and clear, shooting a pointed tweet at Huckabee claiming that she’s “twice the man that he’ll ever be.” Beck also added that she is “closer to ‘the maker’ than he’ll ever understand.”

@NutBallCop @MikeHuckabeeGOP truth is my SPIRIT is stronger & I am closer to "the maker" than he will ever understand pic.twitter.com/iOW14OI9wU

Beck, a 20-year-veteran and recipient of the Purple Heart and Bronze Star, said that Huckabee has no idea what it’s like to serve and that he would make a poor military leader:

“He’s taking his religion and his personal beliefs and disenfranchising a large portion of the population. And I just think as a leader, you need to put the people ahead of your own feelings sometimes. Governor Huckabee has no idea what it means to sacrifice. It’s service and sacrifice over your own person. Others above self—always—and he does not understand that.”

Beck appeared earlier this year on Out There with Thomas Roberts where she discussed her campaign goals and plans for facilitating transgender integration in the U.S. military; watch Beck’s interview with Roberts below:

Previous Post: « Kentucky High School Removes Gay Basketball Player from Team’s Yearbook Page
Next Post: Steve Grand is Right About Our Fixation On the Male Body, But It’s Not Going Away »