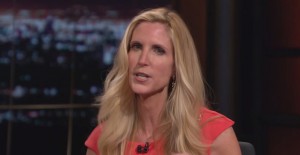 Conservative commentator and professional troll Ann Coulter ignited a bit of a firestorm last night for a Twitter tirade reacting to the GOP presidential candidates opening remarks during the debate:

Cruz, Huckabee Rubio all mentioned ISRAEL in their response to: "What will AMERICA look like after you are president."

How many f—ing Jews do these people think there are in the United States?

Maybe it's to suck up to the Evangelicals.

How to get applause from GOP donors: 1) Pledge to start a war 2) Talk about job creators 3) Denounce abortion 4) Cite Reagan 5) Cite Israel.

Reactions on the Twitter-verse were swift, with actor Seth Rogen summing up most people’s thoughts of Coulter quite nicely:

.@AnnCoulter you're a horrible fucking idiot.

Why is anyone surprised Ann Coulter is getting more desperate for attention? It’s all she ever had and it’s going. pic.twitter.com/N7gVaNrjty

Want more on our coverage of the 2016 election? Click HERE for our hub.

Previous Post: « US Priests Accused of Sex Abuse Get a Second Chance by Relocating to South America
Next Post: 16 Big Shows Coming to Broadway This Fall: A Cheat Sheet »