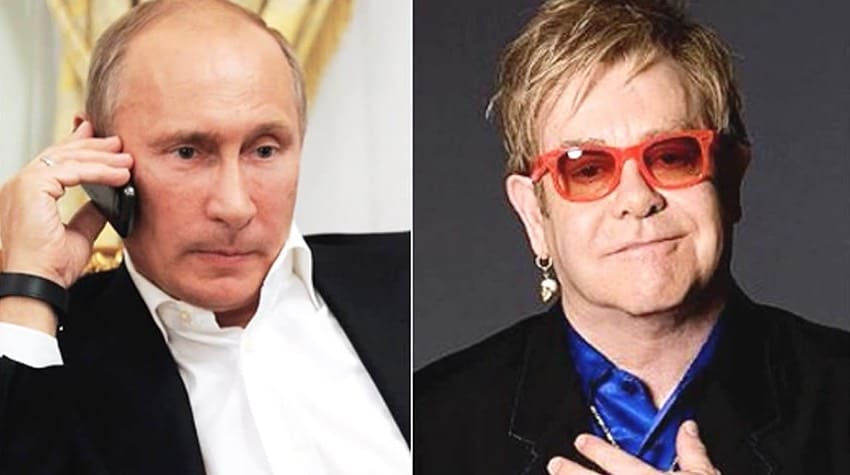 Sir Elton John is the victim of two Russian pranksters who called the rock star and pretended to be Russian President Vladimir Putin.

The call to Elton, which was posted to YouTube, was made after he expressed interest in talking to the Russian president about LGBT rights, following a trip to the Ukraine in which he had spoken at a forum and met with President Poroshenko. Listen to the call below.

Vladimir Krasnov and Alexei Stolyarov, known by their show-names “Vovan and Lexus”, are known for hoaxing celebrities and had Sir Elton fooled enough that he posted about it on Instagram:

Said Vovan to a Russian newspaper: “We thought Putin wouldn’t want to meet him or call him at least in the nearest future, but it turned out Elton John’s been waiting for such a call. That’s why he immediately believed we were exactly those whom we introduced ourselves as.”

Says Elton on the call, in which the false Putin speaks to Elton through a false press secretary:

“I am a musician and a philanthropic person and a humanitarian. I am not a politician and I would love to sit down with the president and discuss things face to face because I think we can solve many issues together.”

Says the false press secretary: “He heard that you were in the Ukraine not long ago and you were talking to Mr. Poroshenko and he thought it was like a political event.”

Replies Elton: “I was just asking him to embrace the LGBT population in Ukraine because they can help boost the economy in Ukraine and my position in life is that people who are gay should be included in all walks of life and be given basic freedom.”

After explaining that he would like to speak with Putin about the troubles gay people have in Russia, Elton adds:

If the problems Russian gay people face were not so serious, the prank might have a funnier effect, but instead shows how seriously Elton takes his advocacy.

Yesterday, the Kremlin denied calling the singer, but did say that such a meeting might be possible:

Peskov denied the phone call had taken place. “I don’t doubt that if there is such a request, the president will be ready to meet with Elton John among others to give answers to all the questions that he might ask,” he told journalists. “But we haven’t received such signals yet.”