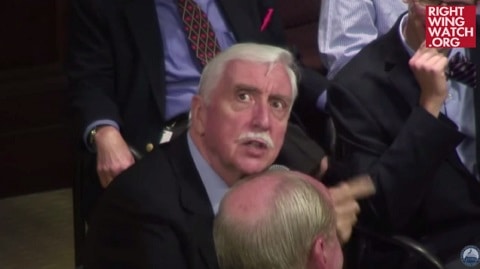 “A proposal, something along this line, that we in the pro-family movement start using related terms, but keep ‘marriage’ for what it always was.

So we might call — and this is to be worked out — but something like, if you’re talking about gay marriage you call it ‘garriage.’ If it’s lesbian, you call it ‘larriage.’ If you want a generic homosexual marriage it’s ‘harriage.’ But getting these words into use I think is key. And that will take time, but whomever holds the language ultimately holds the whole game.” 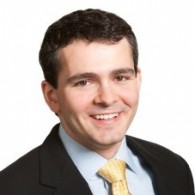 Fagan said the concept of marriage is “highway robbery of a concept that isn’t theirs, it’s humanity’s.”

His comments were made at the launch of Ryan T. Anderson’s Truth Overload, “the first book to respond to the Supreme Court’s decision on same-sex marriage [which] draws on the best philosophy and social science to explain what marriage is, why it matters for public policy, and the consequences of its legal redefinition.”

Clearly uncomfortable with Fagan’s suggestion, Heritage Foundation member Anderson (right) voiced his concern about how “that be heard by other people?”

Previous Post: « AsapScience Gets Handsy with a Lesson on Why Self Love is Good for You: VIDEO
Next Post: Comedian Joe Rogan’s Post About What Aliens Would Think of Kim Davis Wins the Internet This Week »