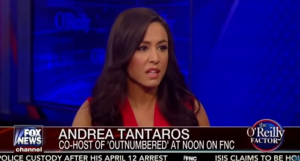 You know you’ve gone off the right-wing deep end when even Fox News is struggling to defend your nonsense.

First it was a panel of Fox News legal experts on Monday, who called Davis’ lawyer Mat Staver “stunningly obtuse” and “ridiculously stupid.”

Then it was Shep Smith, who used a choice Taylor Swift quote to chastise Davis and her supporters during the network’s live coverage of the “Free Kim Davis” rally Tuesday.

And on last night’s O’Reilly Factor, Fox News host Andrea Tantaros said that while she is sympathetic to Davis’ beliefs, the Kentucky clerk “doesn’t have a legal leg to stand on.”

“She cannot unilaterally come out and decide that she’s not going to enforce the law and again it does set a dangerous precedent…a woman with Sharia not issuing drivers licenses to women because she doesn’t believe they can drive or say somebody who says they don’t believe in the Second Amendment and won’t issue a gun permit.”

Of course, there will always be pig brained Todd Starnes to pick up the anti-gay slack, as this recent interview with hate leader Tony Perkins illustrates:

Previous Post: « 5 Things Not To Miss In Chicago
Next Post: The OXD Mirror: New Music For The Final Weeks of Summer »