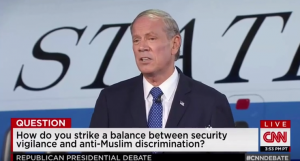 As expected, the Kim Davis drama was brought up at the Republican Party presidential debate tonight, with the responses differing wildly among the GOP “kids’s table” participants.

Former New York Gov. George Pataki, who agreed that the Kentucky clerk was “different from Islamic radicals in the Middle East,” had the strongest condemnation of Davis on the panel, saying:

“An elected official can’t say ‘I’m not going to follow that law if it conflicts with my beliefs.’ I think she should have been fired and if she had worked for me I would have fired her.”

Pataki went on to make a well-reasoned point:

There is a place where the religion supersedes the rule of law. It’s called Iran. It shouldn’t be the United States.

You can watch a live stream of the debate here (no cable subscription required).

Previous Post: « Mike Huckabee: I Wasn’t Responsible for Playing ‘Eye of the Tiger’ at My Kim Davis Rally
Next Post: News: Evan Wolfson Day, Gay and Disabled, Queer-Washing, Matt Damon, Snakes Down Under »