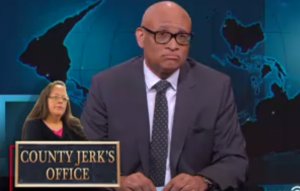 Nightly Show host Larry Wilmore took “county jerk” Kim Davis to task Monday night for continuing to cash in on her $80,000 a year salary despite vowing to no longer do one of her chief responsibilities as county clerk: issue marriage licenses.

“So you’re telling me Kim Davis is collecting a government paycheck in order to sit around and let everyone else do all the work? I thought we called people like that ‘welfare queens'”.