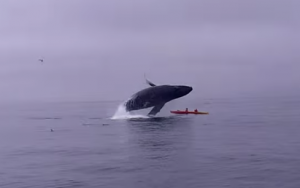 Check out this incredibly close call captured from a whale-watching boat in Moss Landing, California.

“We were taken under the water by the whale, perhaps in the down-draft,” kayaker Tom said in an interview with Inside Edition. “I think it brushed against me while I was out of the kayak… Neither of us know how we weren’t ended there and then.”

Captain Michael Sack of Sanctuary Cruises witnessed the incident and later wrote on his website:

Kayaking with whales can be extremely dangerous. It can turn into a life or death situation real quick-like. Within seconds. It was very scary to watch.

Today a couple of kayakers were very lucky. They came very close to getting crushed to death by the mighty humpback whale. A full-size humpback can weigh in at 40-tons. That’s a lot of heavy blubber that would surely flatten a kayaker if the whale had a direct hit.

Check out the footage below: