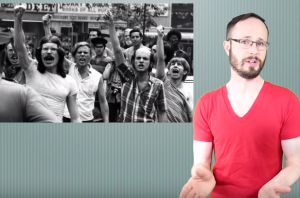 By now, you’ve seen the calls for boycott and read the unflattering reviews (including our own) of Roland Emmerich’s Stonewall.

Emmerich himself did his movie no favors by using the term “straight acting” to describe the Midwestern hero at the center of Stonewall, saying in an interview with BuzzFeed:

“You have to understand one thing: I didn’t make this movie only for gay people, I made it also for straight people. I kind of found out, in the testing process, that actually, for straight people, [Danny] is a very easy in. Danny’s very straight-acting. He gets mistreated because of that. [Straight audiences] can feel for him.”

Writer Matt Baume explains why this term “straight acting” is a no-no:

“It is galling that someone would use this term after directing a movie about queer liberation. Obviously Roland didn’t pick up on any of the lessons from the actual riots, which were all about fighting for the right to not be ‘straight acting,’ to no longer be punished for being perceived as anything other than a masculine stereotype. In 1969, when the Stonewall riots happened, if you could pass as straight, you didn’t need to throw any bricks. You could hide. It was the people who couldn’t hide who had to fight back. These people rioted so that we wouldn’t have to ‘act straight’ in order to be safe. And now, here’s a guy who claims to be telling their story and yet he’s hiding their gayness behind a character who he holds up as ‘straight acting,’ perpetuating the very thing that was oppressing them.”

Related, Meet the Unsung Heroes of ‘Stonewall’ You Need to Know