Rowan County, Kentucky Clerk Kim Davis, a longtime Democrat, has announced she is now a Republican ahead of her appearance at the Values Voter Summit an annual gathering of conservatives hosted by the hate group Family Research Council. 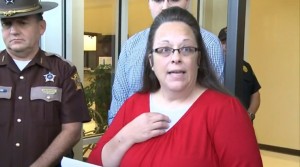 Rowan County Clerk Kim Davis, 50, who has said her beliefs as an Apostolic Christian prevent her from issuing marriage licenses to same-sex couples, said they had changed parties last week. She was a long-time Democrat in eastern Kentucky.

“My husband and I had talked about it for quite a while and we came to the conclusion that the Democratic Party left us a long time ago, so why were we hanging on?” she told Reuters in an interview at a hotel in Washington, where she has traveled to be feted at a Family Research Council event later on Friday.

Davis says she disagrees with the ACLU and lawyers who suggest that the altered marriage licenses issued since she has refused to put her name on them are invalid.

Previous Post: « Matt Baume Explains Why ‘Stonewall’ Film Is An Insult to the Memory of the Real-Life Rioters
Next Post: Jeb Bush Suggests Black Voters Back Democrats Because of Promises of ‘Free Stuff’ »