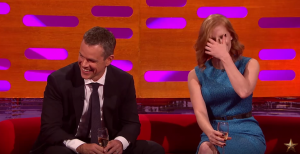 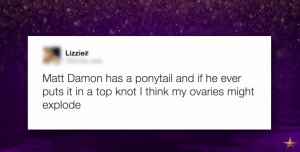 See what Damon thinks of giving everyone on Twitter #ladyboners in the video below.

Vanity Fair reports Damon’s ponytail was for his role in The Great Wall, an upcoming mystery thriller set around the historic Chinese edifice.

Related, Matt Damon Shirtless and Ripped on the Set of the New ‘Bourne’ Movie

Previous Post: « NASA Confirms There is Flowing Liquid Water on Mars
Next Post: Fashion Makes a Huge Difference in the Lives of Trans Teens: WATCH »