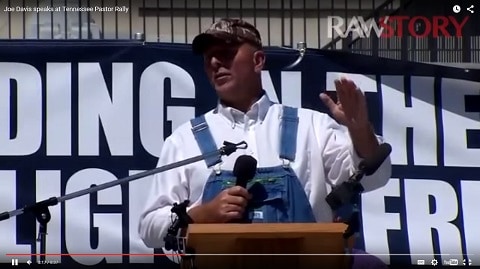 Last Thursday, at a frankly bats–t rally against planned parenthood in Tennessee, a befuddled looking Joe Davis, the husband of Rowan County Clerk Kim Davis asked the crowd to pray for his family so that “god will give us the strength to fight this battle until it’s over with,” reports Alternet.

Confusing actual law with religious conviction, Kentucky pastor Randy Smith said that “Kim Davis was lawlessly put into jail for standing upon the convictions that God had given her.”

Watch a clip of the rally below.