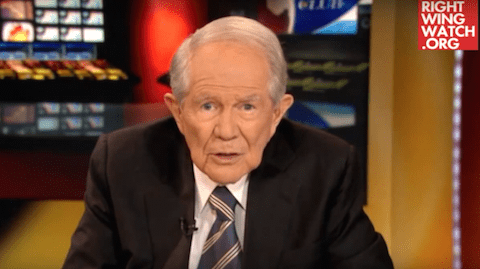 As Kentucky County Clerk Kim Davis continues to refuse marriage licenses to same-sex couples in spite of her failed appeal, conservatives like Pat Robertson are calling Davis a “victim of sodomy as law of the land,” reports Right Wing Watch.

Robertson warned that the Supreme Court’s ruling undermines “freedom,” and those objecting to “sodomy laws” are the persecutors:

“[T]here will be persecution time and time again against those people who disagree with the prevailing view that sodomy should be the law of the land and should be practiced openly and without any restraints whatsoever.”

I support Kim Davis like I'd support a judge in 1858 who wouldn't authorize the capture of a fugitive slave, "law" or not.

Watch Robertson warn about fallout and persecution toward people who oppose “sodomy as law of the land,” below: