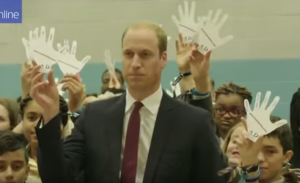 At a school in west London yesterday, Prince William showed his support for an anti-bullying campaign helping to empower LGBT youth. The future King was visiting the school in partnership with the Diana Award, a charity founded as a legacy to the late Princess Diana.

During an hour-long training session William vowed that if he saw anyone bullying a lesbian, gay, bisexual, or transgender‎ person he would step in and confront the abuser after comforting the victim.

‘I would try to confront, to tackle the person. I usually find myself right in in the middle of problems so that’s pretty much where I’d be,’ he said during an LGBT session where participants were asked to stand on one side if they would comfort the victim, on another if they would confront the perpetrator, or at the back if they would adopt another strategy.

‎His support for confronting the homophobic bully was hailed as the ’embodiment’ of Princess Diana’s legacy and a landmark moment by Tom Broughton, 17, who had told the Duke of Cambridge how an anonymous online stalker had urged him to kill himself after he came out as gay when he was in his final year of secondary school.

As part of the workshop, Williams and the participants were asked to write down five people they can turn to for help and advice. Check out footage from the event below: