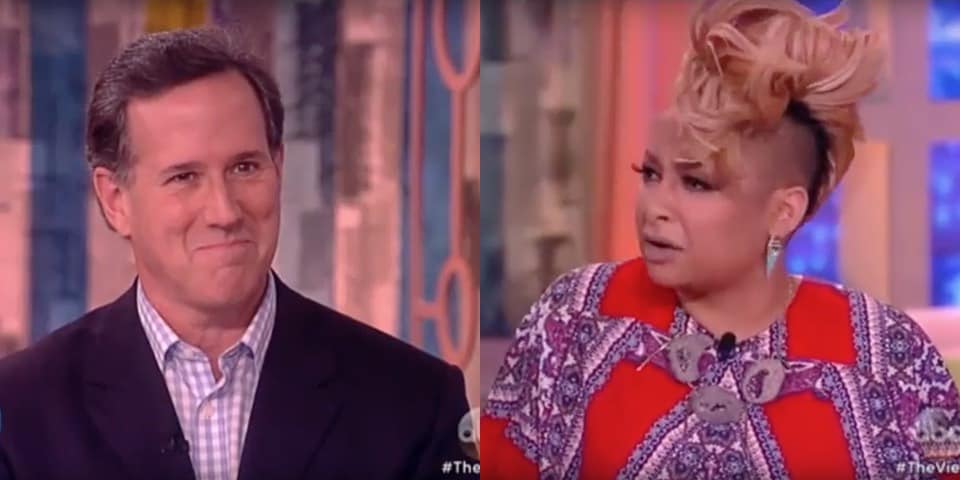 Rick Santorum showed up on The View today where Raven Symoné faced him down on the issues of marriage equality and gay parenting, getting Santorum to admit that gay couples can raise children well.

Asked Symoné, to cheers from the audience?

“Why can we not have equal marriage rights in your opinion?”

“Marriage has a particular role and purpose in society, it always has. And the whole purpose of marriage is for society to encourage men and women to come together to form permanent bonds for the benefit of each other, just like you would say two women coming together [benefit] each other, but the greater purpose that society has always valued is to bring men and women together so when they have children, there’s a permanent bond by which those children can be raised by their natural mother and natural father. And when you have a law that says, as the court said, that marriage has nothing to do with children anymore, then what you’re going to have, is you’re not going to have a society encouraging the behavior that is in the best interest of children and the future of society.”

“I dont understand why you feel like people in the gay and transgender community can’t raise a very smart, beautiful, intelligent child as well as a man and a woman when sometimes, coming from a heterosexual family, there’s a lot more fighting, there’s a lot more stuff going on – sometimes. I don’t understand why you feel like that community can’t give and provide for that child just as well as a straight couple can?”

Frothy was in a lather:

“I’m not saying that a same-sex couple can’t have a very positive and nurturing environment but the natural mother and natural father of that child is what historically is in the best interest of that child.”