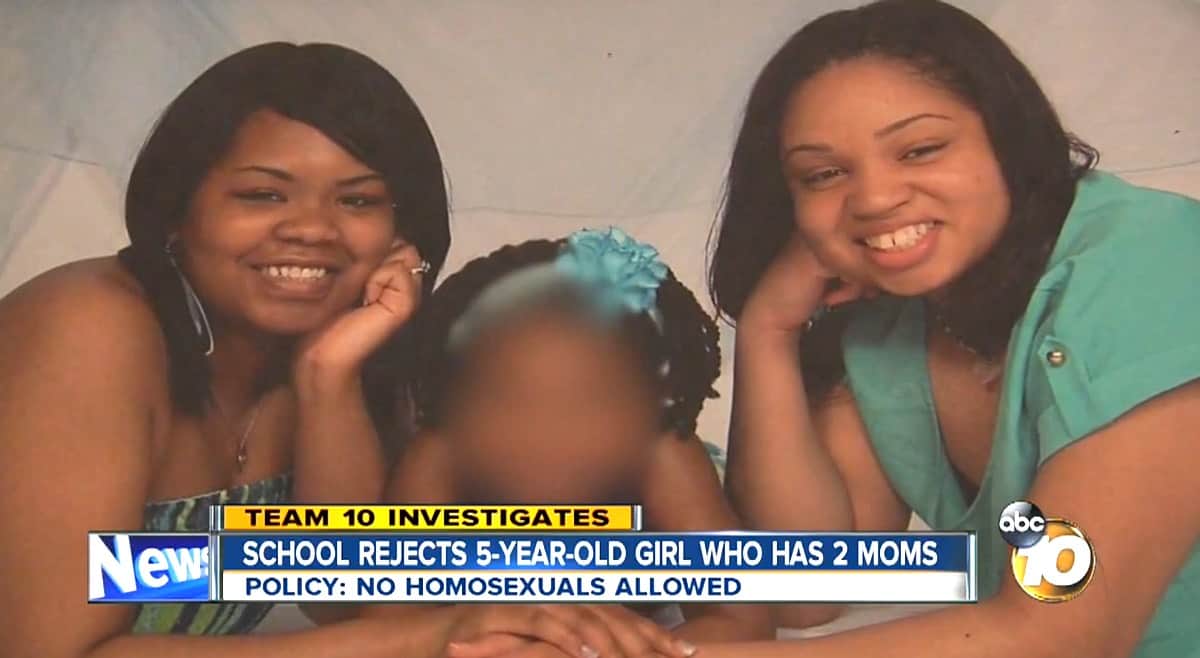 San Diego’s Mt. Erie Christian Academy abruptly rejected a 5-year-old girl a few days before class started because her mothers, who are married (one is a stay-at-home mom, the other is in the Navy), are living in “sin” and the school doesn’t condone it. ABC 10 reports:

The girl learned a few days before school started that she was no longer welcome at the place where she had attended both preschool and summer school.  The reason, according to one of her mothers, is the school doesn’t want anything to do with homosexuals…

“They told us, ‘oh this is not about your child,’ but it is about my child,” said Sheena, who asked 10News not to use her last name.

A woman, who only gave the name “Kailyn” and described herself as the director of Mt. Erie, told Team 10 the school has a non-discrimination policy. When asked whether it was discrimination to bar the 5-year old from attending kindergarten because her parents are lesbians, Kailyn responded: “The Bible says homosexuality is a sin. We don’t condone any sinful lifestyles.”

“Mt. Erie Christian Academy is a religious, Bible-believing institution providing education in a distinct Christian environment, and it believes that its biblical role is to work in conjunction with the home to mold students to be Christ like. On those occasions in which the atmosphere or conduct within a particular home is counter to or in opposition to the biblical lifestyle that the school teaches, the school reserves the right, within its sole discretion, to refuse admission of an applicant or to discontinue enrollment of a student. This includes, but is not necessarily limited to, living in, condoning or supporting sexual immorality; practicing homosexual lifestyle or alternative gender identity; promoting such practices; or otherwise having the inability to support the moral principles of the school (Leviticus 20:13a; Romans 1:21-27; Matthew 19:4-6; I Corinthians 6:9-20).”