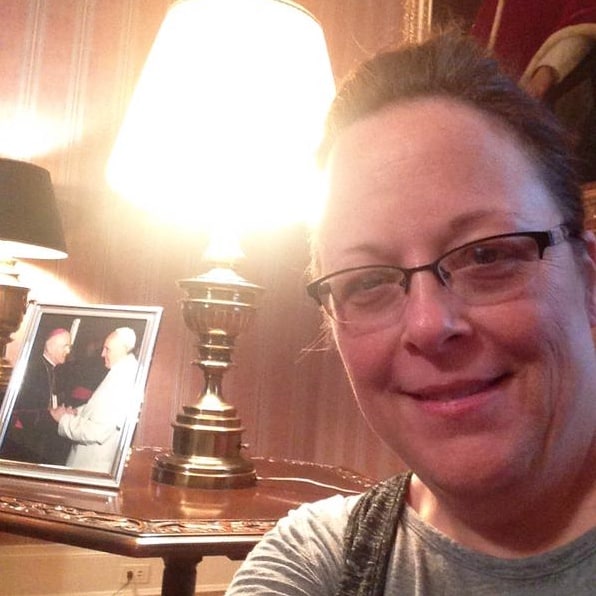 Kim Davis’s attorneys at the Liberty Counsel are pushing back after a Vatican statement this morning that Pope Francis did not request a meeting with Kim Davis, nor did he offer her unconditional support.

The brief meeting between Mrs. Kim Davis and Pope Francis at the Apostolic Nunciature in Washington, DC has continued to provoke comments and discussion. In order to contribute to an objective understanding of what transpired I am able to clarify the following points:

Pope Francis met with several dozen persons who had been invited by the Nunciature to greet him as he prepared to leave Washington for New York City. Such brief greetings occur on all papal visits and are due to the Pope’s characteristic kindness and availability. The only real audience granted by the Pope at the Nunciature was with one of his former students and his family.

The Pope did not enter into the details of the situation of Mrs. Davis and his meeting with her should not be considered a form of support of her position in all of its particular and complex aspects.

The Liberty Counsel posted several photos featuring Davis and her husband allegedly waiting in the Vatican Embassy waiting room, and of the alleged van in which Vatican security picked them up.

Vatican sent security team to pick up Kim and Joe Davis from Omni in DC on 9/24 about 1:15 pm to meet Pope Francis pic.twitter.com/3zygb5J3yY

Staver claims the Reuters story, which was based on the Vatican statement, which is now published on the Holy See press website, is a lie:

“That statement by Reueters (sic) citing a ‘senior Vatican official, who delined to be named,’ is false. There was no line of people before, near, or around Kim Davis. Had Kim Davis been in a line of people or been seen by anyone outside of Vatican personnel, we would not have been able to keep her visit secret. Kim’s face is easily recognizable. When we walk through airports as large as LaGuardia, Philadelpia, and Reagan, people recognize her and give her encouragement. This was a private meeting with no other people except for the Pope and select Vatican personnel.”