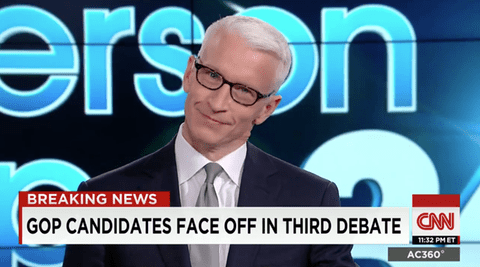 “My boo” Anderson Cooper has done it again.

During a round table discussion on CNN after Wednesday night’s GOP debate, Democratic strategist Donna Brazille and Cooper had a memorable exchange that began with a conversation about fantasy football.

COOPER: Are you looking at me?

NAVARRO: The look of sheer terror in his eyes right now…

COOPER: You had me at fantasy, but football you lost me.

BRAZILLE: Let’s not get there, babe.

COOPER: Someone had to tell me the World Series is going on right now.

And thus, Cooper and Brazille have done the perfect follow up to their famous “my boo” moment from 2008.

Watch the video, below:

And refresh your memory on the “my boo” moment, here: