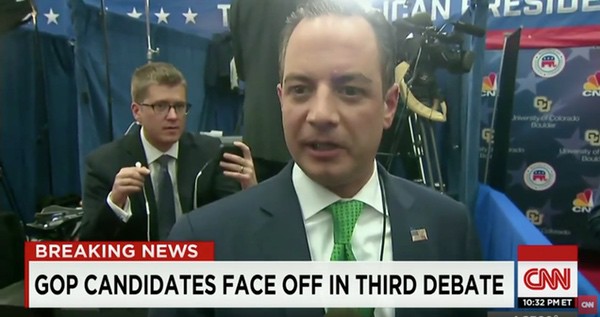 RNC Chair Reince Priebus was furious at CNBC after last night’s debate, accusing the network of providing a “hostile” environment for the candidates.

CNBC should be ashamed of how this debate was handled. #GOPDebate

And the RNC released this statement:

“While I was proud of our candidates and the way they handled tonight’s debate, the performance by the CNBC moderators was extremely disappointing and did a disservice to their network, our candidates, and voters. Our diverse field of talented and exceptionally qualified candidates did their best to share ideas for how to reinvigorate the economy and put Americans back to work despite deeply unfortunate questioning from CNBC,” said Chairman Priebus.

“One of the great things about our party is that we are able to have a dynamic exchange about which solutions will secure a prosperous future, and I will fight to ensure future debates allow for a more robust exchange. CNBC should be ashamed of how this debate was handled.”

What did you think about the debate?