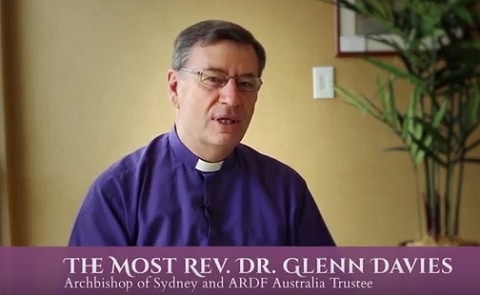 Dr. Glenn Davies, the Anglican Archbishop of Sydney, Australia, has issued a “call to arms” to oppose same-sex marriage.

Speaking at his opening address to the Sydney diocese 2015 synod, Davies said:

“The antagonism of the world to the word of God is perhaps seen nowhere more acutely than in the virulent challenge to the definition of marriage which pervades conversations in the media, the workplace and even in our places of leisure. The bombardment, both subtle and not so subtle, is relentless.

Arguing that the law prevents siblings and those already married from marriage equality, he said “we are the ones portrayed as being discriminatory in our defense of marriage, when in fact we are not alone.”

He continued that in defense of the definition of marriage supposedly created by god, “we need to be courageous in our discussions both in private and in public, yet we also need to be sensitive and loving in our defense of biblical truth.”

Although Davies expects “criticism…ridicule…and hatred,” he said Anglicans “must persuade with gentleness … sincerity and grace, as befits disciples of Christ.”

Previous Post: « Vloggers Will and R.J. Show You How To Striptease for Your Man: WATCH
Next Post: Nancy Pelosi Hilariously Dishes on GOP at Big Gay Ice Cream Shop Interview: WATCH »