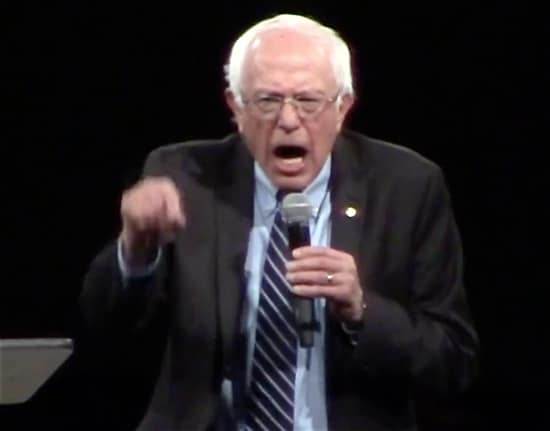 At last night’s  Jefferson-Jackson dinner sponsored by the Iowa Democratic Party, at which Bernie Sanders, Hillary Clinton, and Martin O’Malley appeared, Sanders took a huge shot at a narrative pushed by Bill and Hillary Clinton (as recently as Friday, on Rachel Maddow), that DOMA was a “defensive act” meant to block a federal marriage amendment.

Said Sanders, to huge cheers from the crowd:

“In 1996, I faced another fork in the road. A very, very difficult political situation. It was called the Defense of Marriage Act. DOMA. Brought forth by a Republican led Congress, and it’s purpose was clear, to discriminate against gays and lesbians into the law. And let us all remember that gay and lesbian rights were not popular then, as they are today. It was a tough vote. And I’m sorry to have to tell you that that bill won by an overwhelming majority in the House of 342-57. That was not a political easy vote. Now today, some are trying to rewrite history by saying that they voted for one anti-gay law to stop something worse. That is not the case. There was a small minority in the house opposed to discriminating against our gay brothers and sisters and I am proud that I was one of those members.”

Here’s a longer report on the highlights of the dinner:

Previous Post: « Oklahoma Haters To Rally Against Gay Marriage At State Capitol On Sunday
Next Post: Manchester United’s Luke Shaw on the Alleged Gay Footballers: ‘It’s Not Me’ »